To The Underwater World at Curaçao Sea Aquarium, Ocean Lens

On the 7th of March I got to experience the brand-new tour at the Curaçao Sea Aquarium Park, the Ocean Lens. The Ocean Lens in an attraction that was built in the open water, right next to Sub Station, and it is 5 meters deep. Thus, this is diving but in a dry environment as you do not enter the water.

There I was standing in in front of the Curaçao Sea Aquarium, surrounded by crowds of people and it was cloudy with a strong wind, waiting for our tour guide to come. When Zyta, our guide, picked us up, after we signed a waiver, we walked out towards the lagoons. On my left I can see children snorkeling in the Animal Encounter lagoon, to my right I can see various aquariums, and further on I can see Dolphins in their Lagoons. The Dolphins were swimming around in their lagoons towards the trainers, as we head towards the touch tanks. Zyta started to tell us about the Open Water System at the Curaçao Sea Aquarium, how it is all pure fresh sea water that comes directly from the ocean. In fact, the Dolphins can jump over the barrier rocks and out of the lagoons. However, they choose to stay, and the trainers can see they are happy and calm as they choose to reproduce here. All the sea water goes into a silo and is then used in the Sea Aquarium. The aquariums and lagoons have the same environment as the ocean, for example, if the species feeds from coral then the aquariums have them too. Some of the animals at the Sea Aquarium are young or wounded and since the environment in their aquarium is the same as the ocean they can be returned to the wild and live healthy lives. At the Sea Aquarium, they get a safe environment to grow and heal.

As the water comes into the park it is also pumped out to the sea, thus, any eggs or food gets sent to the sea and helps sustain the ecosystems around the park. As we head towards the middle of the park we can see these bright pink, as their color suggests, healthy flamingoes. The flamingoes here in the park are wounded and they can’t fly. Thus, in the wild, they wouldn’t survive. There are certain aquariums with a curtain in front of them since they are the aquariums for fish from the depths of the sea. The water in these tanks are cooled and the curtain is used to make it dark as it is the natural habitat of these fish. They were brought up with the Substation for research.

We head out to the front of the park towards the bridge that goes over the channel where all the water from the Sea Aquarium comes out and an entire ecosystem has been made as a result. There are also mangroves that grow along this channel, which helps protect small fish from predators so they can grow and reproduce. The small fish we could see there are from the eggs created in the aquariums, as well, fish come from open sea to live there as it is a safe haven. The small corals that came or broken from the aquariums can’t survive in the sandy bottom, thus, they are collected and placed in a fam to grow within the Sea Aquarium. Once they are big enough they are planted on metal trees and places in the channel outside the Sea Aquarium. As the channel is connected to the open water the fish can leave whenever they want or are ready too. In all the Open Water System helps maintain healthy environments for all the species in the Sea Aquarium, helps maintain the ecosystems outside the park, and helps bolster the fish population.

We now head to the right side of the Sea Aquarium, next to the Sea Lion lagoons, towards the Substation Curaçao. The Substation Curaçao is a mini-submarine that can take a maximum of 4 people, 300 meters deep into the ocean. With the help of the Substation 60 new species have been discovered over the last eight and a half years, there is much more to be uncovered. Once you go down this 5-meter stairway to the underwater world of Curaçao, you can lay down and relax, while you watch fish swim all around the window. From the Ocean Lens, if you are lucky, you might potentially see this submarine pass by the window or even a Dolphin.

It was serene, quiet, and relaxing within the Ocean Lens. I got very excited seeing all the various fish surrounding the lens such as Rainbow Parrotfish, Blue Tang, Sergeant Major, Yellowtail Parrotfish, Yellowtail Snapper, Trumpet Fish, and so much more. After spending 30 minutes within the Ocean Lens, laying down on the pillows there, we went up towards to surface. It was a wonderful way to discover and see so many fish in the sea without having to into the water. I came up feeling fresh and very relaxed.

Right next door to the Curaçao Sea Aquarium is the Mambo Beach BLVD (Boulevard) with its numerous restaurants, cafes, shops, and beach. After exploring the Sea Aquarium and relaxing within the Ocean Lens you can also enjoy spending some time in this boulevard.

Within the Sea Aquarium, there are many tours you can enjoy such as the Animal Encounter or the Dolphin Programs, as well, within the Aquarium there are many activities. Moreover, in the area, there are many tours that depart from there such as the Blue Room Snorkeling Tour with the Pelican Express or the various boat tours on the Catamaran BlueFinn (West Coast, Sunset, Friday Tugboat), which departs from Mood Beach next to Mambo. Or if you feel the need for speed, take a ride on a Jet Ski in Mambo or head towards Punda, Willemstad.

Imagine taking the stairs into the deep… This is now a reality! Descend into the unique underwater observatory and experience the reef drop in air-conditioned comfort. Expect the unexpected! This is the open water after all! 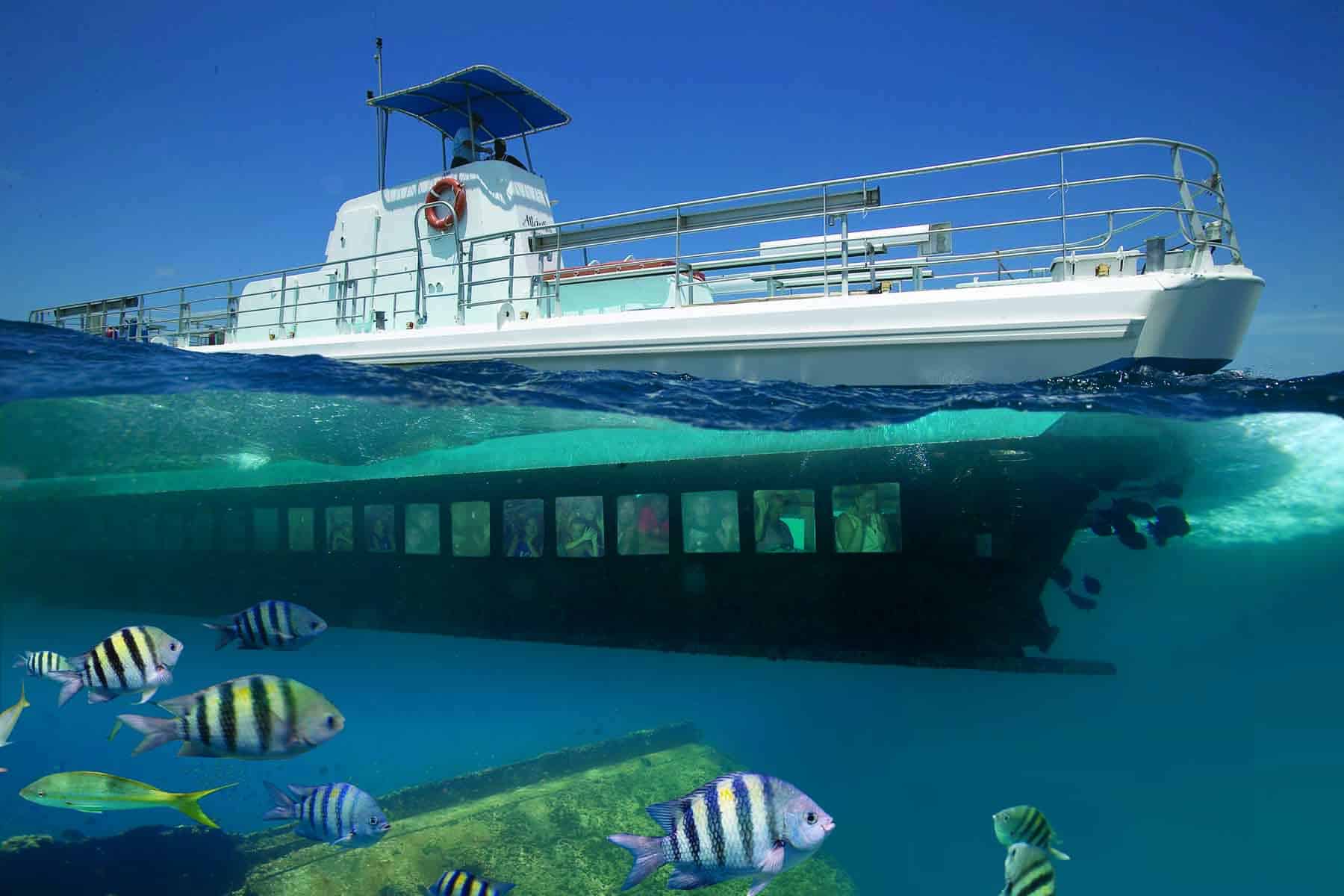 You can take off your goggles! The semi-submarine Seaworld Explorer allows you to discover the sea around Curaçao through your own large window on board. As you sail along the coast of the island, a guide scatters some food in the water and you will see hundreds of tropical fish swim right past your nose! 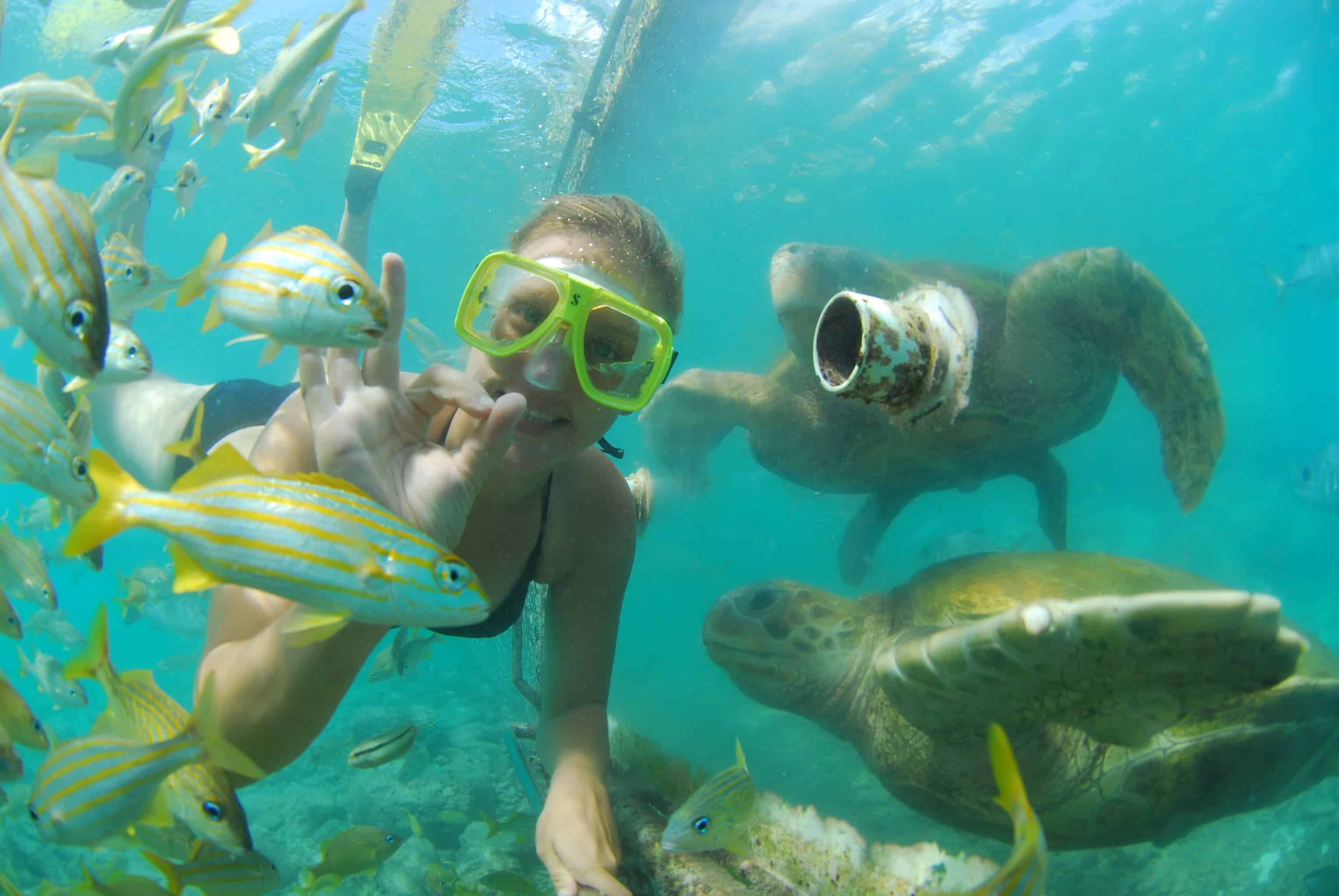 You put on your goggles unsuspectingly when you suddenly see a gigantic grouper swim past you! This is what your snorkeling tour in the closed-off lagoon of the Sea Aquarium will be like. If you can’t wait to see as many sea animals from Curaçao as possible, this Animal Encounter is just for you.